For those of you following the church’s Bible reading plan, this month we read through the difficult and controversial Book of Revelation: the last book of the Bible for the end of the calendar year.

This week we begin reading together the Book of Revelation. This is one of the most difficult books in the Bible, because it uses lots of images that were clear to people in Palestine 2,000 years ago, but that aren’t immediately clear to us in Taiwan today. One of the common mistakes we can make when reading this book is to think that it only talks about the end of the world. But if this was the case, the book would have been useless to all Christians in the church over the last 2,000 years! And it would have nothing to say to us today. Of course, this is very wrong. The Book of Revelation has had an important message to tell all people, in all ages of the church. It was because the book had this message, that the early church decided to include it in the Bible. But what is that message?

To put it simply, the message of the Book of Revelation is that Jesus Christ is our Lord and God—and not just our Lord and God, but Lord and God of the whole world. In this world, there will be political leaders who want us to believe that they are our lords and masters, but we Christians can never accept this type of thinking. 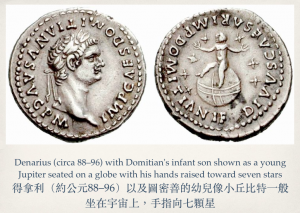 In the early years of the church, the Roman Empire was ruled the Emperor Domitian. This emperor spoke of himself as a god on earth, and demanded that all people, including the Christians worship him as god. Of course, this is something that the Christians refused to do; and because of their faith, many Christians were killed. Domitian also had a son who died at a very young age. After his son’s death, Domitian printed a new coin with a picture of his son sitting like a ruler on top of the world and controlling the 7 stars that determined the fate and happiness of all people. When the people saw this coin, the message was clear: Domitian is a divine father, and his dead son still rules as a God from beyond the grave, controlling the lives of all people—so all people in the empire must worship them.

In this world there will always be rulers who pretend to be divine, who demand the worship and loyalty of the people. But the Book of Revelation makes it clear from the very start: our true Lord is Jesus Christ, he is our true God, he is the one who deserves absolute loyalty and praise. In a world that surrounds us even today with so many false gods, this is an important message for us to remember.

Welcome to English Ministry SLPC Taipei, We hope you find a home here at SLPC to grow and love God more! We aim to be light in the middle of Taipei to share the good news with our neighbors and the world.